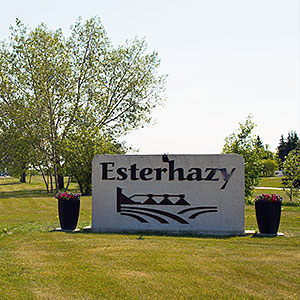 Esterhazy is located in the south-eastern corner of Saskatchewan, 30 km south of the Yellowhead highway, and 55 km north of the TransCanada highway.
The town is situated between two scenic valleys: the Qu’Appelle River Valley that extends 260 km east to west from its confluence with the Assiniboine River in western Manitoba to Lake Diefenbaker in south central Saskatchewan, and the Kaposvar Valley that skirts in the town’s north end then winds through the town’s 9 hole golf course and flows south-east along an abandoned rail line to join with the Qu’Appelle River Valley near the neighbouring village of Tantallon. Esterhazy is less than a five-hour drive from Saskatoon, Saskatchewan’s largest centre and less than a three-hour drive from the province’s capital city of Regina.
Esterhazy is reputed to be named after a Hungarian aristocrat, Count Paul Oscar Esterhazy. Count Esterhazy acted as an immigrant agent in 1886 to help settle 35 Hungarian families at Kaposvar, south of the present-day Esterhazy. The Kaposvar colony flourished and Esterhazy soon became known as a viable agricultural region for later waves of immigrants. However, much controversy surrounds Count Esterhazy.
Records reveal that the Count was christened Johannes Packh. He adopted the Esterhazy name when he was 35, claiming it to be his rightful name, "incontrovertible proof of the legality of my claim and of birth right.Esterhazy’s claim was never recognized by the Esterhazy family, one of the wealthiest and most prominent families in Hungary. A year after making the claim, Esterhazy immigrated to North America.At the heart of the first Hungarian homestead is the Kaposvar Historic Site and Museum, with a ruggedly beautiful stone church built in 1906. The annual Our lady of Assumption pilgrimage is held on site each year on the third Sunday in August.
Esterhazy is home to three potash mines owned & operated by Mosaic. The term potash dated back to the pot ash that early pioneers leached from wood ashes and evaporated in large iron pots. Today, the potash that is mined at Esterhazy is used in fertilizer around the world, from North America, South America to Europe and China. Potash is rich in potassium, one of the 14 elements necessary to plant life. When reserves of potash ore were discovered in Saskatchewan in the 1950’s, IMC began construction of a mine near Esterhazy. The mine shaft reached a depth of 1,030 meters at completion in 1962. Today, Mosaic operates three mines in the Esterhazy area, K1 and K2 and  K3  and is the world's largest combined producer of potash and phosphates, two vital nutrients.
Todays fire rating is Low